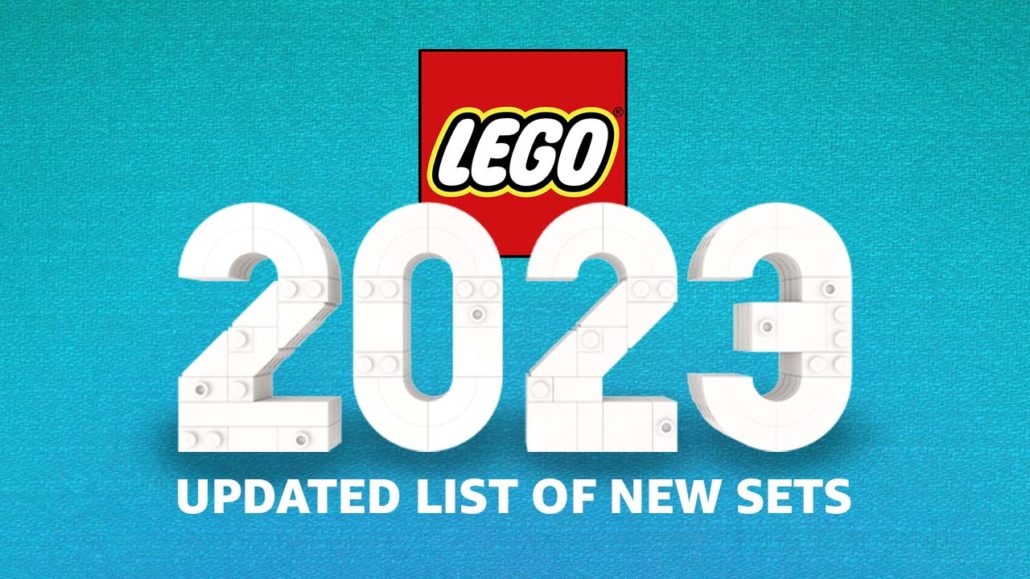 It’s time to take a look at the upcoming year and at the LEGO 2023 novelties. On this subpage, which we will be kept up to date permanently, you will find all the sets LEGO will probably bring to market in the coming year.

At the moment, the LEGO 2023 list contains mainly novelties from the 1st half of 2023. In the course of the next weeks and months, we will feed the list with new content and then also feed info on sets from the 2nd half. Bookmark this page and check back regularly for the latest info.

At the current time, the list includes mostly regular sets and only a few exclusive sets. This is because the information is mostly due to retailers listing products too early or info leaking out from order lists. Of course, we will also add the exclusive LEGO 2023 novelties in the course of the next months.

While we’re pretty much certain that LEGO Architecture novelties will be released again next year, so far we don’t know anything more specific about the LEGO Architecture sets that are scheduled for release in 2023.

The LEGO Art themed world is now firmly established at LEGO, although LEGO has recently deviated from the classic mosaics from the first year, sometimes significantly. We can expect more LEGO Art sets in 2023 that depart from the classic paths around mosaics, with one or two images made of 1×1 round plates or tiles sure to appear.

In 2022, the first LEGO Avatar sets were announced, based on the somewhat dated first film. In early 2023, the second wave from the themed world will be released, which will presumably be based on the second part Avatar: The Way of Water.

LEGO BrickHeadz fans will also be treated to more sets in 2023. Here, too, the first info has already leaked out, although presumably most BrickHeadz sets will again be sold exclusively at LEGO in the online store and brand stores and will not be sold in stores. In any case, we should again hope for various BrickHeadz with and also some sets without license:

One of the absolute fan favorites by now are the LEGO Chinese New Year sets, which are released year after year in January to match traditional Chinese festivals. Even though the two sets from 2022 didn’t hit the nerve of the fans that much, we are excited to see which sets will be released for this small themed world in 2023.

LEGO City is probably the most famous themed world that comes out of Billund year after year. Of course, numerous sets will be released here in the coming year as well, with much of the focus so far revolving around the Stuntz and Police sub-themes.

No year without new boxes full of many, (too) colorful bricks! In 2023, the LEGO Classic novelties will definitely continue to be colorful according to the names:

LEGO Creator 3-in-1 sets will again feature various new sets in 2023, each of which can be combined to create three different models.

The superheroes from the DC universe have been treated rather stepmotherly at LEGO for several years. Nevertheless, of course, some LEGO novelties around Batman and Co. will appear again in 2023:

The cooperation between LEGO and Disney will of course not come to an end in 2023 and will probably even be intensified further, as Disney celebrates its 100th anniversary in 2023. Here we should expect the following novelties, among others:

The creative world of LEGO DOTS is composed of many 1×1 tiles in different shapes and colors. In 2023, new sets will be added to the colorful themed series, including licenses:

Even the smallest LEGO fans will again be supplied with new sets in the coming year. This is what the LEGO DUPLO novelties 2023 bring for you:

LEGO Friends is likely to see a breath of fresh air in 2023. We already know about the following sets that are scheduled for release in 2023:

In the world of LEGO Harry Potter also continues. In addition to the classic playsets, Hogwarts 2023 banners will also be released, another type of set that should remind you of the Hogwarts Moment books of recent years. The following sets will be released in 2023:

We can hardly believe it: LEGO Lord of the Rings is returning in 2023. We don’t know yet if it will really be a real themed world or if it will just be single exclusive sets. Below we list all the sets that are supposed to appear.

What used to be called Creator Expert is now called LEGO Icons, and starting in 2023, this lettering will also be on the boxes. We have listed below which LEGO Icons sets are to be released in 2023, although the list is likely to grow massively over the course of the year.

For the LEGO Ideas themed world, there are some new releases pending, which will probably be released in 2023. Unfortunately, we don’t know how exactly the assignment of the numbers fits for these sets that have not been presented yet, but in any case, the following LEGO Ideas sets are likely to land on the shelves here in 2023:

We already reported about the LEGO Indiana Jones sets that will be released in 2023. In the following, we have listed all the novelties in tabular form:

We already know that new LEGO Jurassic World sets and of course some new dinosaurs are also scheduled to be released in 2023, but unfortunately we lack concrete info so far. We’ll add to the table as soon as we know more.

Our favorite superheroes from the Marvel Universe will continue to be supplied with new sets for young and old in the coming year. All details known so far can be found in the following list:

The LEGO Minecraft themed world has been holding its own for many years now, and in 2023 it will feature a host of new building sets:

The LEGO Minifigures collectible series will probably appear in small cardboard boxes for the first time during 2023, but this will probably not be until the second half of the year. We expect the first new releases of the year to still come in the classic blind bag:

New sets will also be released for the LEGO Monkie Kid series in 2023. Not much is known so far, but we list all known info below and add it as soon as possible.

LEGO Ninjago still doesn’t seem to be showing any signs of fatigue as it enters a new round in 2023. Not only will some new “EVO” sets appear here, but of course new mechs and dragons.

The LEGO Polybags that are expected to be released in 2023, we list you here again separately.

wpDataTable with provided ID not found!

LEGO Seaonal is the “theme world” where LEGO puts sets for certain seasonal occasions. There will be some sets here again in 2023, with guaranteed smaller sets for Chinese New Year, as well as Easter, Christmas and many other occasions:

In 2022, we saw LEGO Speed Champions sets released for the first time, not only with official license from car manufacturers, but also from movies. This should continue seamlessly in 2023:

LEGO Star Wars 2023 new releases should be of particular interest to most of our readers. Here, too, numerous sets will be launched in the new year, for which the first information has leaked so far. Thanks to numerous series on Disney+, not only sets for already known content will be released, but also sets for completely new content.

There is also some new info about the LEGO Super Heroes sets for 2023, although for some sets it is not clear if they are sets from the Marvel or DC universe. Therefore, we simply list these sets here as Super Heroes sets and then assign them to the two theme worlds later, when we know more.

And in 2023, LEGO and Nintendo continue to collaborate and launch a new wave of LEGO Super Mario sets that invite you to play. We wouldn’t be surprised if sets specifically for adults are included here again.

One of the traditionally most popular themed worlds in Germany is LEGO Technic, and here too new sets will be launched in 2023. One of them was actually supposed to be launched in 2022, but was then unceremoniously postponed. Everything we know so far can be found in the following table.

What are your thoughts on LEGO 2023 new releases? Have you been able to discover sets you’re looking forward to, or do you need some visuals first? Feel free to share your thoughts in the comments and discuss the upcoming LEGO sets for next year.

Please confirm deletion. There is no undo!